What Does Facebook’s Mobile Ad Growth Mean for Your Business? 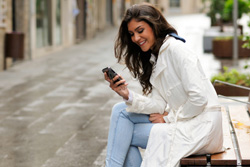 Recently, we all found out that Facebook is making a killing with their mobile ads. Facebook drew 41 percent of their revenue during the second quarter of 2013 from mobile ads, which is up 14 percent from their 2012 second quarter revenue. Google, on the other hand, reported a revenue figure that was lower than the figure they had anticipated.

So how did Facebook start dominating mobile ads and competing with major search engines like Google? And what does that mean for your business when it comes to allocating advertising dollars for online ad vs. mobile ad placement?

The mobile format lends itself to multiple daily check-ins. People are much more likely to get on Facebook multiple times a day than they are with Google. Therefore, mobile ads on Facebook are getting more impressions and clicks than ones on Google.

What this means for businesses: Run some diagnostic ad placements for different segments of your target audience. Discover which people are clicking on ads through Google and which are clicking through on Facebook. Use that information to target customers with appropriate messages in appropriate platforms.

Facebook developed its advertising initiative from the ground up. Google has spent years perfecting online advertising, but branching out into mobile advertising has proven more difficult. Facebook strategized a way to incorporate online and mobile advertising at the same time, and so both platforms are seeing revenue growth.

What this means for businesses: Companies get to reap the benefits of the hard work that Facebook has put into their mobile ads. Instead of beating your head against the wall over Google mobile ads that simply aren’t working, focus on the Facebook ads that are and maximize their potential.

What this means for businesses: Instead of taking the time and effort to create separate ads, you can create one set and put your extra time into other advertising initiatives.

Advertising is integrated right into the news feed. Facebook’s news feed provides users with the latest or most interesting information their friends and pages are sharing. So why not integrate advertising right into that stream? Currently approximately one in every 20 stories on a Facebook news feed is an ad.

What this means for businesses: Consider how you can create ads that will integrate seamlessly into the Facebook news feed but attract enough attention that people will click on them.

With this news on Facebook’s mobile ad growth, it’s not a bad idea to look at how your company is spending money on online ad placement and think about taking your own initiative to get in the Facebook mobile ad game. Try a few, compare with Google’s analytics and move forward based on how you see your ads performing.