How to Make Social Media Demographics Work for You 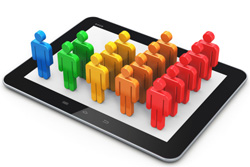 Examining social media demographic information is a fantastic starting point when it comes to determining how to reach your target customers and where to focus your efforts. Here’s a look at some of the most recent demographics for popular sites like Facebook, Twitter, Pinterest, Instagram and Tumblr.

A survey by the Pew Research Center’s Internet & American Life Project revealed the following social media demographic information for 2012. The percentage in parentheses indicates the percentage of internet users who frequent the social network.

Social media sites have become significantly more popular among both Latino and African-American populations, especially Twitter, as well as low-income earners who make $30,000 annually or less. This data suggests that social media may be an effective method for reaching marginalized communities.

As social media continues to evolve, it’s only natural that demographics will continue to change. Over time, social media users shift and sway, particularly as new social networks gain popularity and existing networks change their features and/or focus. The bottom line is that demographics play an integral role in both social media marketing and engagement. Consider using a social media monitoring program that will aggregate demographic details for the conversions that they measure. Gathering detailed information about your target audience including gender and age groups, social networking sites and geographical data will help your company maximize its potential for social media marketing initiatives.