How Facebook is Widening the Web for Users with Visual Impairments 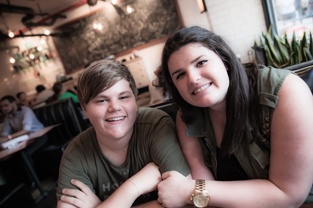 Mindlessly scrolling through your Facebook or Instagram feeds typically serves as something to fill the time when you’re waiting for an oil change, sitting at a red light, standing in line at a coffee shop, or strategically avoiding eye contact with a passer-by.

What do you see as you scroll?

Pictures of friends and family, your favorite bloggers’ latest photos, dynamic visuals of athletes and celebrities – Facebook has more and more become a visual network, and sharing photos has never been more popular.

But have you ever wondered what the social media world would look like if you were blind or visually impaired? Even with the help of a screen-reader (a software application that reads text on the screen in a computerized voice) you’d still have trouble knowing what or who is in the photo all your friends are talking about. Talk about feeling disconnected. And that’s exactly the opposite of Facebook’s mission.

A recent study that Facebook conducted with Cornell University showed that blind and visually impaired people are interested in visual content on social media, but they often feel frustrated because they can’t fully participate in conversations centered on photos and videos. Worldwide, more than 39 million people are blind, and more than 246 million have a severe visual impairment.

Facebook wants every user to feel included and to enjoy the social network as much as the next user, regardless of visual impairment. For this very reason, Facebook’s created an automatic alternative (alt) text tool that will help users who are blind or have visual impairments “see” photos by using object recognition. The tool describes what’s in each photo so the user feels part of the conversation, even if they can’t physically see it. For example, people using screen-readers scroll or click on a photo and hear a list of items that appear in the photo, such as, “five people, smiling, ice cream, outdoors.”

Facebook’s new tool can identify basic things like cars, baseball, ice cream, and eyeglasses. Eventually, Facebook plans to include a more detailed description of what’s in a photo, including the identity of the people in it. Down the road, Facebook also hopes to expand the accessible tool to more devices and languages. At this time, the tool is only being tested using screen-readers set to English on IOS devices, available for people in the U.S., U.K., Canada, Australia, and New Zealand.

Every day, people share more than 2 billion photos across Facebook, Instagram, Messenger, and WhatsApp. The automatic alt text tool is a huge step toward providing our visually impaired community members the same enjoyment that everyone else gets from photos on Facebook.

Facebook recently released a statement that reads, “The launch of automatic alt text is just the beginning: we are committed to improving this technology and making a more inclusive Facebook experience. We are thrilled to share this step forward with you.”

We look forward to seeing what the future holds, Facebook!