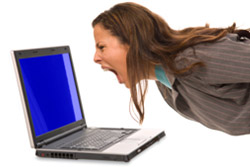 It’s inevitable that even the most successful brands on Facebook and Twitter will face customer complaints. Some are simple, such as an issue with an online checkout process, while other times irate customers want both you and the rest of your followers to hear them. Practicing good social media strategy in the face of complaints is critical in order to keep both your angry customers and your other followers around.