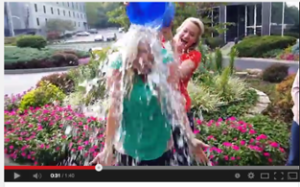 Well, we did it! Not a group to let a viral social media trend pass by, the team at 2060 Digital donated and then got ice cold to raise support and awareness for this worthy cause. Check out our video!

Wondering what in the world is with this viral social media sensation?

As of August 21, the ALS Association has received more than $41 million in donations and reports more than 739,000 new donors. But ice-bucketeers are also donating to ALS organiztions of their choice, supporting family and friends who suffer from the incurable disease.

A little more than a month ago, pro golfer Chris Kennedy and his family members – including Anthony Senerchia, who has ALS – recorded themselves getting doused with ice water and posted videos to Facebook and YouTube, announcing their donation to a non-profit organization that helps low-income families who suffer from ALS. They then called out friends who called out friends who called out friends to take the challenge, eventually getting to Pete Frates, a former D1 college athlete who has was diagnosed with ALS in 2012 and has been tireless in spreading awareness.

Frates called out several athletes and celebrities, and that’s when things really took off, with everyone from President George W. Bush to Bill Gates accepting the challenge, filming themselves donating and then submitting to their icy fate. Millions of videos have been posted to social media – with 2.4 million on Facebook alone.

Plenty of things go viral on social media – some good, some bad, some funny, some annoying – but most everyone can agree that this summer sensation is completely worth it for the awareness, support and funds raised to find a cure for ALS.